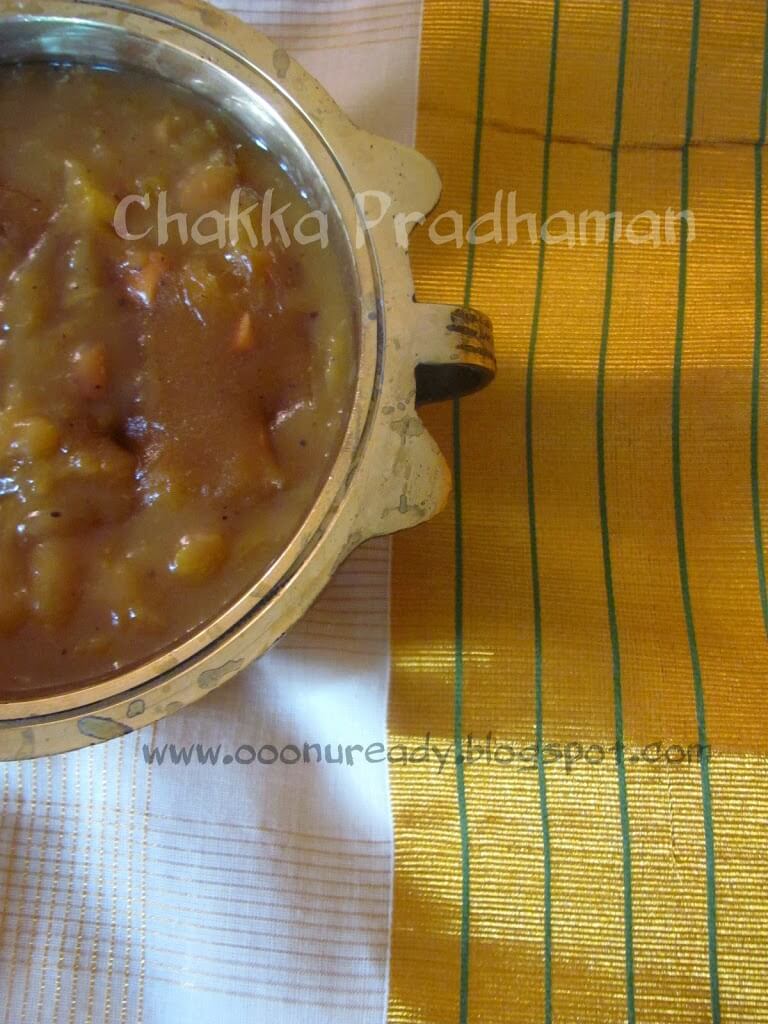 A traditional onam sadya has two desserts. They are both payasams usually made of ada (aka pasta pudding because the ada resembles a pasta) one is usually loaded with jaggery and coconut milk. The other is a milky dessert. But there are other payasams made with jaggery that you could try out for onam. Like the payasam made with lentils (cherupayar payasam), vermicelli (semiya payasam), banana (pazham pradhaman), mango (mambazha pradhaman) or even jackfruit (chakka pradhaman). I like the jackfruit version for its strong flavour. There’s something about jackfruit that attracts me – maybe it’s the overpowering quality it has over every other flavours that it blends with. I know the jackfruit season is coming to an end but if you have jackfruit preserves tucked in your freezer now is the time to bring it out. So if you have access to jackfruit (those in Kerala definitely would) try something different this Onam.
Ingredients for Chakka Pradhaman
Finely chopped ripe jackfruit- 1kg
Jaggery (1/2 kg) this also depends on how sweet your jackfruit is so increase or decrease the quantity accordingly.
Powdered cardamom- 2 tsp
Powdered dry ginger- 1 tsp
Thin coconut milk (from 2 large or 3 small coconuts)
Thick coconut milk- from the same number of coconuts as mentioned above.
Cashewnuts- 1/2 cup (broken into small pieces)
Raisins- 1/4 cup
Ghee (clarified butter)- 3 tbsp
Thin strips of coconut – 1/4 cup (optional)
Directions
Cook the jackfruit with 1/2 cup water till its mashed. In a pan, melt the jaggery with very little water. Fry the cashew nuts and raisins in a pan with ghee and set aside. Prepare the coconut milk b grinding the coconut in a wet grinder. For preparing first milk that is thick, grind the coconut with very little water and strain it. Set this milk aside. Now add more water to the ground and extracted coconut left behind after extraction. 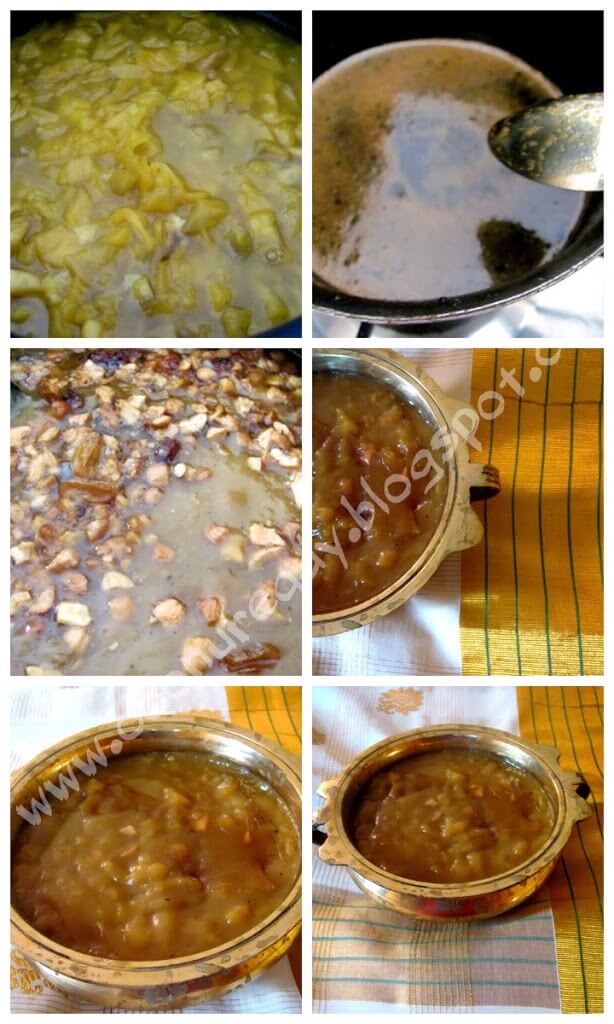 Squeeze out the milk that comes out, this would be thinner in consistency and is the second milk.Set this aside in a separate bowl. Now add the melted jaggery to the simmering mashed jackfruit and stir for five minutes.Add the thin coconut milk and the powdered spices. Let the payasam simmer for another five to ten minutes. Now add the thick coconut milk. After this let it simmer for a minute and add the fried nuts and raisins. Take the payasam off the flame.
Note: You can use 3 packets of instant coconut powder- 100 g each ( or 1 can of coconut milk instead of using fresh coconut milk) 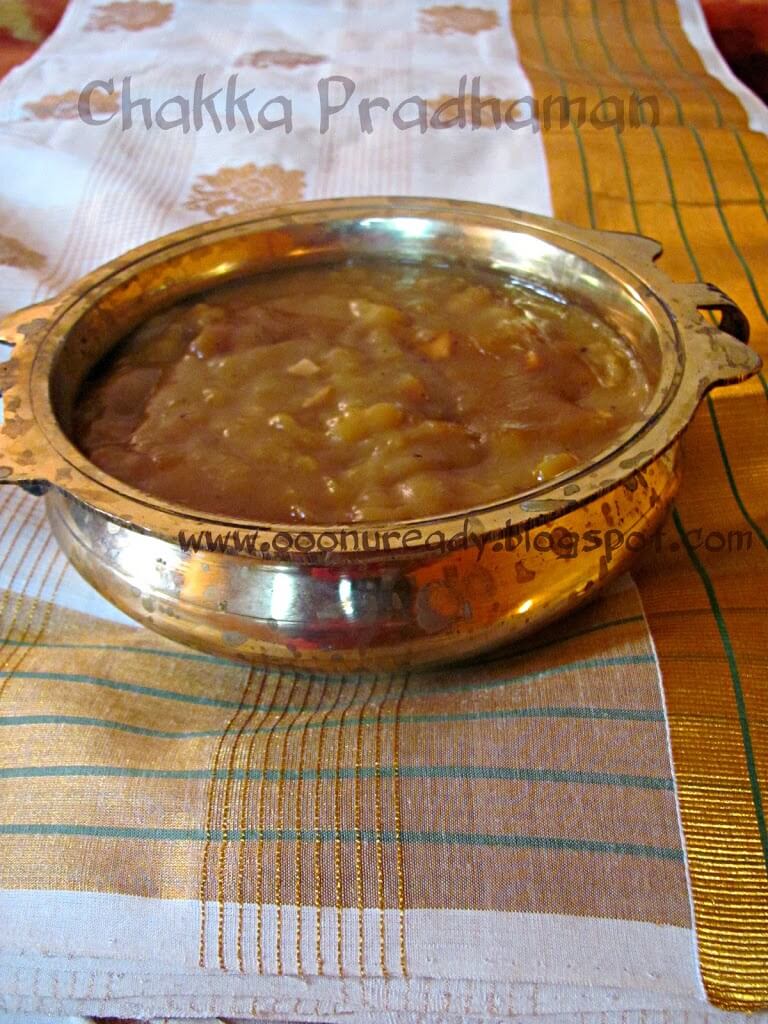 When I started blogging 5 years ago, I wanted to record my family recipes and I also named the blog with a very traditional Kerala name for this reason. Over the years I... 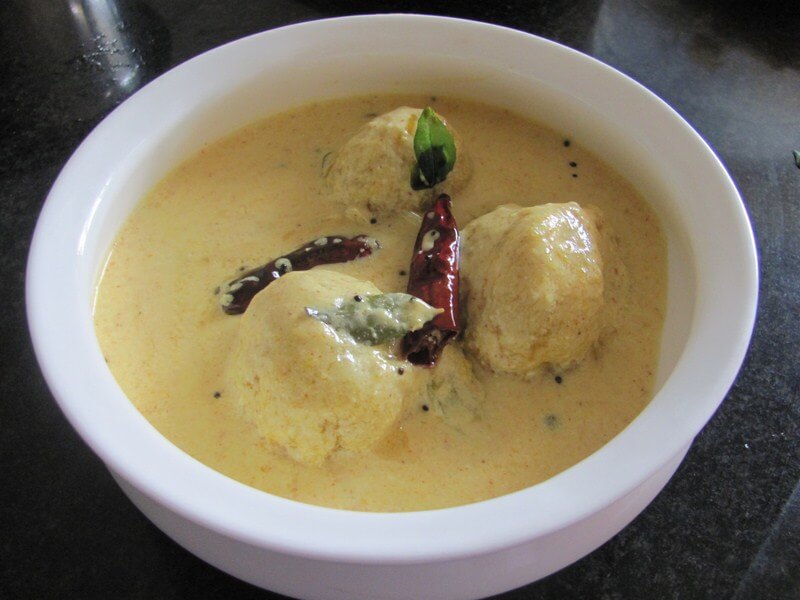 I have been waiting to upload this series for nearly three years. It never happened for various reasons- me never being home for Onam, me being worried to post these recipes with a thesis...